We understand that a large part of our success is down to the community that fosters us. It’s therefore important to us that our role in the local community grows as strongly as our rapid business expansion. One way we plan to do this is through our new Charity of the Year scheme, during which we will be doing all manner of crazy things to raise money for The Rainbow Trust. But, the focus of this blog is our partnership with our local under 14s football team, the Dorkinians Saints.

Everyone at Stanbrook & Nicholson recognises the important role sport can play in society. From improving fitness to finding new friends, football has the ability to enhance the lives of young people beyond measure. It’s for these reasons that Stanbrook & Nicholson are immensely proud to support our local under 14 team. In return for our logo appearing on their shirts each game, we have supplied all of their kits for the 2013/14 season.

Currently competing in the Horsham & District Youth Football league, the Dorkinians Saints U14s are top of this season’s league table after seven games. Despite a single away loss at Perrywood, the Saints are flying high, averaging in excess of four goals a game. But, it’s not just all about offence. Their defence is credited with conceding only three league goals so far, contributing to an impressive goal difference of 21. While only half of the season has been played, the team’s displays so far mean they are odds on to win the title.

The Saints’ cup performances this season have been equally impressive. We’re pleased to report that they’ve already won the under 14s Presidents Cup with a string of comprehensive victories. One such notable win was their game against Horsham Baptist & Ambassadors that resulted in a 12-1 demolition of the home side.

It goes without saying that all of us at Stanbrook & Nicholson are immensely proud of what the Saints have achieved this season. We’re also grateful for the opportunity to support such an important part of the local community and we wish everyone involved the best of luck for the rest of the season (not that they need it!).

Stanbrook & Nicholson are always interested in supporting local causes. If you have any ideas of how we can do that, please don’t hesitate to get in touch. 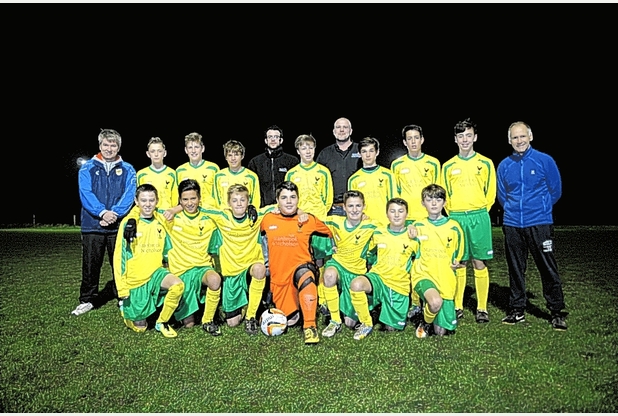 Ben and Simon with the Saints