Santa joins our Charity of the Year campaign

Though our Charity of the Year campaign doesn’t officially start until January, that didn’t deter us from popping along to Ashtead Park’s Festive Weekend in aid of our nominated charity, Rainbow Trust. Festive generosity was in the air as the event raised a huge £1,500 for terminally sick children, with co-founder of Stanbrook & Nicholson, Simon Nicholson, donning a Santa suit and playing Saint Nick for the day.

As far as we’re concerned, no Christmas would be complete without Ashtead Park’s Festive Weekend. While Santa is always undoubtedly the main attraction, there’s plenty more to keep everyone entertained. From face painting and children’s rides to petting a pony and local choir performances, everything is done with a merriment befitting of the season, as well as a fantastic cause in mind. Stanbrook & Nicholson would like to take this opportunity to thank everyone who lives in the local area for coming along and supporting the fundraising efforts.

Of course, Santa is always the main attraction at any Christmas event. Simon did a great job keeping the grotto warm, meeting all of the children and making their dreams come true. Though he joked about the “humilition of being an oversized and rather youthful looking Santa” he also had some serious words to say about the company’s Charity of the Year campaign. Everyone at Stanbrook & Nicholson agrees wholeheartedly with Simon when he says “we all have a role to play in supporting those less fortunate than us and the community within which we live and work”. That’s exactly the message we’re trying to get across with our annual charity scheme.

Rainbow Trust also had many kind words to say about Simon’s contribution over the weekend. They highlighted the importance of schemes like our Charity of the Year campaign to their future. Like most charities, the vital work they do for children all over the country is funded almost entirely on donations from the public.

If you’d like to know more about our Charity of the Year campaign, you can read about it here and here. We’ll be posting regualar updates on our fundriaing efforts so stay tuned! 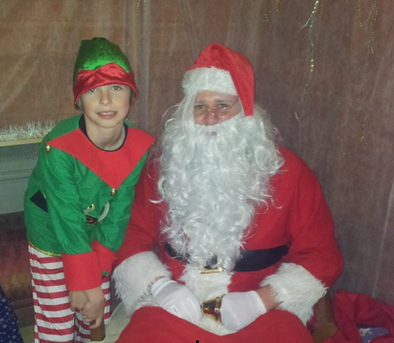